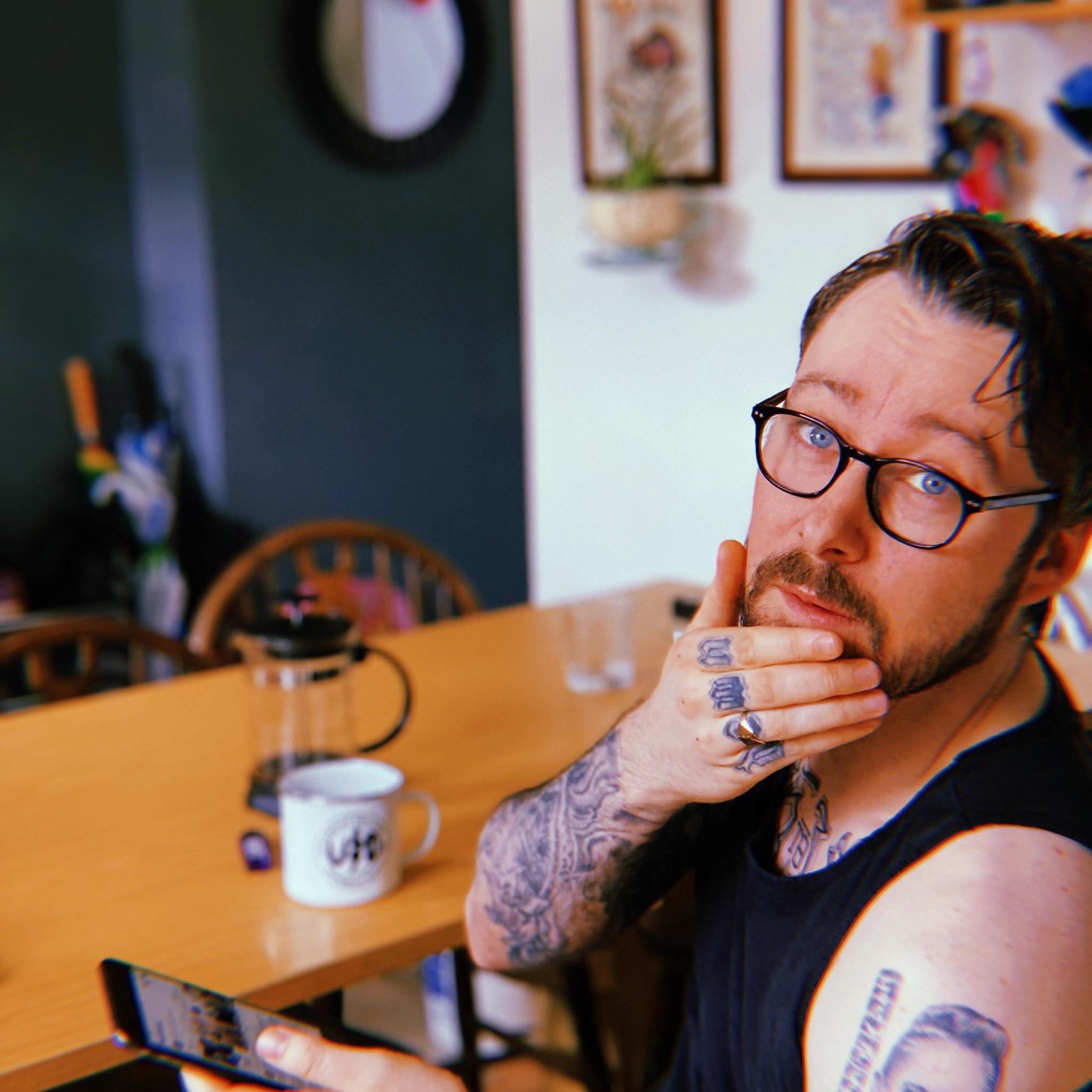 It's a warm summer afternoon during the six week holidays. The year is 1993. I know this as for some reason Chris Dover is wearing my England shirt from the same year during a scuffle with another local kid following our weekly 22 a side football match. It's fair to say 'we go back'.

From early writings to the stars of Leeds United to taping a chair into the back of a van (best not to ask) whilst on tour with our band, we have seen a lot. As adulthood brought new challenges, we split onto different paths and it has been a joy to see my oldest friend live the life he promised he would when we were as young as 13. Here's why you need to know about Chris Dover.

How would you describe what Chris Dover does?

I’m primarily an Americana singer/songwriter with split personalities I’d say. I also play guitar for pretty much anyone that needs me and have a heavy alt/rock band, CPSD, that seems to confuse people because we use synths and samples

Who inspired you to first pick up a guitar?

Has to be Oasis and shortly after, the Beatles, who were the main 'Big Bang' in musical terms. (I) don’t remember exactly what the first thing that I saw or heard was but there was just a collective spark between our group of friends at school where we seemed to start talking about music. I remember going home and mentioning the Oasis version of “I’m the walrus” to my mum and she gave me the red and blue albums by the Beatles on vinyl to check out. I was lost to music at that point I think.

Why do you think the guitar appealed so much? I remember as kids you would genuinely play last thing at night and first thing in the morning. In hindsight, it's similar to the stories you hear about athletes perfecting their sport.

I’ve always said when I play guitar just on my own I can’t feel anything but what I’m playing. As a moody, angsty teenager it was my escape from all those normal growing pains you got through mentally. I remember when my nana passed away sitting and forcing myself to learn “Angie” by the Stones. Not because I particularly wanted to ever play the song but it was just something to sit and focus on to clear my mind. Guitar has always been my go to to keep me sane.

Do you remember your first guitar?

Do you!!?Well I know you probably think it was my Encore Deadnought acoustic, which was the first guitar I seriously owned and played. However my uncle Paul actually gave me my first guitar when I was about 8 or 9 I reckon. It was a sunburst strat copy with air bullet holes in it I think I tinkered with it a little back then but never really began playing, but it technically was my first guitar.


Put yourself back in those shoes; would you swap that first guitar for say, a Gibson Les Paul? Or do you think your craft was learnt and earned from what we would probably deem as an almost unplayable instrument these days?

Mate that Encore was killer! I remember always dreaming of owning a Les Paul because all I wanted to be was Slash. Then I got one. A super nice one. Sounded like it should, Looked like it should and I played that thing for 10 yrs. subsequently all it made me realise was it ultimately wasn’t me. Since that guitar I’ve tried everything trying to find what best lets me make the music I feel I want to make. After all the searching ,and I’m talking hundreds of guitars, do you know what I ended up with as my main stay? An Epiphone. Not a fancy old one. A stock, sub £400, what would be deemed a starter guitar. And I love it. It does everything and most importantly lets me do what I do in the most natural way. Names and brands are lovely for collectors but for me being an artist means finding the tool that works. A lot of what lead me here comes from that long haired weirdo forcing those strings down on that Encore so I wouldn’t change it if I could.

Where did the drive come from?

The drive to play was the love for music. The drive to make a career came way later for me. As you know, we weren’t exactly being told that singing songs was a viable career choice in Pudsey were we? I was lucky enough that after I’d pretty much given up on music as a career option, my Friend (Pudsey based songwriting legend) LSK randomly put my name forward to audition for a session playing job with Maxi Jazz (from Faithless). I went to the audition, got the gig and then for 3 years toured and recorded with some incredible musicians. It made me realise that actually, it is a viable job and if you want it you just need to perfect “the hustle”. The hustle is thinking outside the world school teaches you is the norm. It’s ignoring everyone that has a rye smile when you dare suggest you’re a musician. It’s for every gig request email sent and ignored, sending another 5. It's just pushing to write songs that someday, someone hears and connects with. It’s trying to create something that people won’t forget when you’re long gone and a memory of you that your kids will be proud of ultimately.

Why was it the guitar and not another instrument?

Don’t know if you remember but I actually wanted a drum kit first! I remember being sat in the Vic (a now gone Pudsey Local Pub) one sat afternoon with my mum and dad petitioning for a drum kit, we lived in a terraced house on a normal council estate so this was not deemed to be fair on the neighbours! Hence, guitar. Thank god that’s how it went down because I’ve met drummers and they’re generally more mentally ill than I’ve ever been.

When you play today, do you relate to that 13 year old?

Shit I still play some of those same licks! I’ve still got a riff idea from our band, This Black Velvetine’s writing sessions that I’m convinced I’ll use someday! I still relate to the passion and love for playing and writing. That’s never changed since those first days of us trying to be Oasis.

My kids. I really want them to be proud of the things I’ve done chasing a silly dream. I want to leave behind a body of work that matters.
Who or what influences your writing today?

Life to be honest. The reason I’ve gravitated towards Country music as I’ve got older is the honesty. Benjamin Tod always says sing what you live and that’s what I aim to do. It’s therapeutic to put those stories out into the world and see how they connect with people.

You recently went full time, though I feel you were always full time but flirting with employment to support your passion. Tell me more about what this means for your creativity.

More and more recently the sensible day job has felt like it was stealing time from me. That type of work doesn’t want you to think and corporate business, sure as shit doesn’t want to think about you. I realised during the initial lockdown last year that when the world stopped and we slowed down, a stable job lining others pockets isn’t the only way to live. Creatively, time is all you need in my opinion.

We're the same age and I recently hit a realisation about what 'life' is about. We have it drilled into us from a young age about chasing the career to pay for a nice retirement, often in jobs we dislike that make us miserable. For me, happiness is about having just enough to make you and your family happy, safe and comfortable. This is what I deem as success. What does success look or feel like to you?

That’s it mate. If we’re honest we’re not here a very long time so why do we give up on the things we enjoy and dream about? Why are we schooled into boxes and uniforms? I don’t ever want my children to grow up thinking they must conform to what’s deemed gainful employment. Fuck that! My 8 yr old wants to be a fashion designer and that’s what she’ll be told she can be. Success is feeling comfortable in your own skin and happiness with what you put out in the world.
What does the future hold for Chris Dover and your various guises?

Ooh the exciting stuff! Most importantly a return to live shows both with my band CPSD and solo. I’ve got a couple with the band in August followed my first solo mini tour in Sept which I am terrified about in the best way. I’m also shortly starting work on my first full length solo album to be out early next year and also releasing more singles/videos with the band over the next few months.  Gibson or fender?