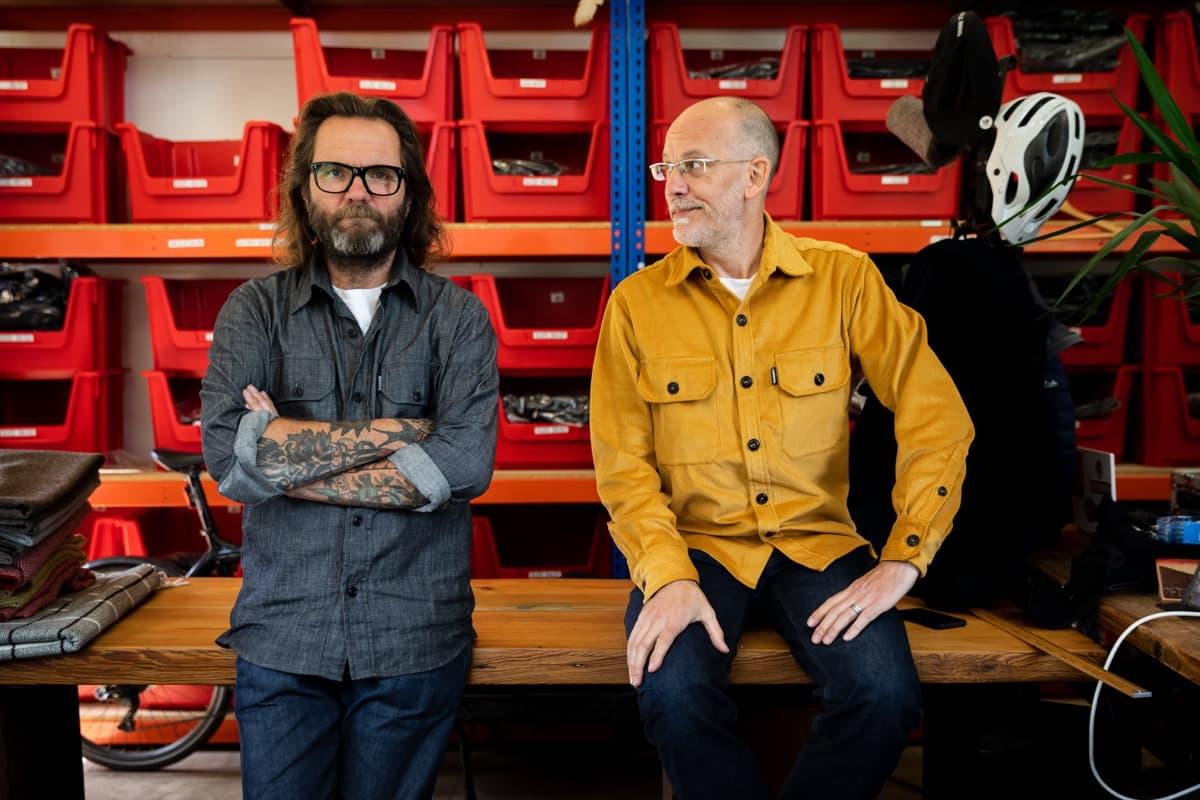 Hebden Bridge is wonderful little town and one I have found myself drawn towards over the years. From the long climb on the road bike over from Oxenhope to a day out on the train with the family, I personally have lots of memories from the many coffee shops that add to this special little market town.

HebTroCo have always been a beacon for me in creating my own business. They do things right. I also believe them, which is massively important for a brand that is as transparent as both Brant and Ed are. Here we stole some time with Brant who kindly took the time to answer our questions.

First things first, am I going to end up as a Facebook Ad if I say something wrong? Joking aside, your marketing is pretty special. Was it a conscious decision or did you one day decide that you'd 'had enough' of the nonsense?

I’ve been looking through our stuff and can’t actually find the first time we did it really. I think it was when we were doing the white T-shirt with British spun cotton and 'woven here' and 'made here' and they were about 40 quid I think and people just went nuts about how could a 40 quid T-shirt be a reasonable thing to sell. Ed has previous on taking negative comments and making positive things out of them. He’s actually got a tattoo that was part of a film he made that was based on a negative comment on a previous film.

Have you ever had anyone take it the wrong way?We’ve had actually quite well established customers get so upset about us calling people out that they’ve kind of boycotted us and won’t buy anything again. I realise it’s quite polarising doing that sort of thing, so we don’t do it all the time, but sometimes it just feels right for us and that’s really how we run the businesses - how we feel is right for us. You make mistakes you do things well you try and see what works and what you’re happy with.

I often refer to you as a great example of selling to your audience. I feel too many people try to sell to those that were never going to buy their 'stuff'. You seem to have perfected this...We try to be honest. I know we don’t appeal to everyone, some people want designer labels, some people want more showy items, we don’t do any of that. Everybody’s always got an idea of what some stuff should look like and what they want, and the great thing is there are lots of companies out there you can buy things from. You don’t have to buy from HebTroCo.Was it really just an idea in a pub?Totally. I’d worked with factories for about 15 years, but those factories are in the Far East making bicycles, and I wasn’t able to do that because my ex wife got ill and I had to stay in Hebden Bridge and look after the children. And that sort of coalesced with our mate Dan making some beer called “Trouser town” and him explaining why Hebden Bridge was called that. There wasn’t like a lightning bolt moment, but there was a point when I had no money and needed a job and thought I wonder if I can sell trousers, and that would be about six months after the sort of trouser town pub incident. But there was one day where I said to Ed “oh you should come and see the trouser factory that I found. And so we went and looked round, and then went to the pub and then went back to the factory, and I went back to the pub and then spent the rest of the day drinking and telling everybody how we were going to start a Trouser company.

Did you have an experience in creating clothing before that? I mean I’ve worn clothes. I’ve been wearing clothes for over 40 years. And I was a product designer I guess, and I had done a bit of sewing, used to make things on my mums sewing machine like bivvibags and panniers and tents and things like that, I made some trousers for my teddy bear. So I had sort of a working knowledge of sewing machines a bit. But no pattern cutting or fashion.

In the beginning, I found that simply finding out 'how to get things manufactured' was frightening. There's no middle ground between small and expensive to large and expensive. What made you believe in your product? Because the way I generally work with the factory is to take a product that they already make and then change it a bit. We did that with the first trousers we made and then sold 176 pairs in five hours, and then because very few sent any of them came back, in fact more people wanted to buy them, then that was a real sort of boost.

Again, I think you embody your brand. I picked up a 'mantra' to help keep me focused when creating, 'people like us do things like this' and I think that's really important. If you wouldn't wear your products then how can you expect anybody else to? From the outside, you guys seem like the perfect HebTroCo customer. Every product we’ve got is because we wanted it. And that’s just what we do. We make stuff we like, that we can make here, that we can make well. There’s obviously more stuff we like then we can make, because sometimes the technology for making that stuff isn’t here in this country anymore. So say this week, I’d like a really nice steel or aluminium water bottle, say, but I just can’t find where I make those here.

I imagine you have customers that keep coming back to you for every release. (The best kind). We have about 20 or 30 customers who just buy everything and there’s three guys who basically jostle to be the first person to buy something. There is one guy who seems to be trying to buy everything that we’ve ever made, including scouring eBay for old stuff. So I have noticed he doesn’t like slim jeans, so he’s dropped the ball already.

You announced a few months back that your shop would be staying closed. What has driven this decision? There are just the two of us, and our unit isn’t very big, and we’ve got a lot of stock, and things like blankets and jumpers, they take up a massive amount of room, and so any sort of shop space, as just been eating up by storage now. Also, open days and having customers in isn’t really very efficient in terms of trying to move the business forward. When we push the time, visiting factories and getting orders out the door, that’s really farm a better use of our time. Plus we have families and we like to spend time with them too and I really didn’t want to keep giving up my weekends, to size up people who had already decided that they couldn’t buy clothes online, so by definition are a bit odd in today’s environment. To do it properly we’d have to employ a member of staff take on another unit spend more time there at weekends spend more time there during the week so probably would need two more members of staff big unit and the economy is that just doesn’t add up. I mean it’s clearly not adding up on the High Street, and I don’t think it is even add up in our location either.